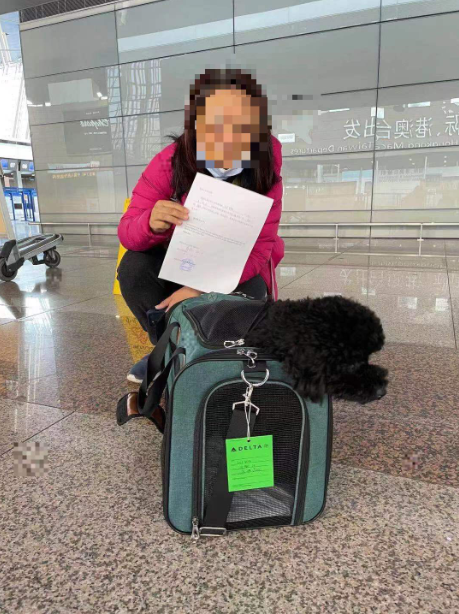 ~Ying, at the Shanghai Pudong International airport with Luna, about to board their flight to Seattle.

In April, Ying became a flight volunteer for the Fur Friend Rescue. Believe it or not, Ying is born afraid of dogs. But eventually, love overcame fear. She took the mini poodle, Luna, from Shanghai all the way to Seattle. Thanks to Ying’s help, Luna ended her three-month wait, and finally reunited with her forever family, and then started her happy dog life! Here is Ying’s story:

It was much easier to bring dogs from China than I had expected.

First, I didn’t do anything except for sending an e-ticket to the volunteer before boarding the plane. I asked many what-ifs, but I was told not to worry because volunteers from Shanghai Bao’en Temple would take care of it.

The volunteers arrived early at the airport with Luna before checking in. Luna’s ID and Immunization report were all at hand, with only 2 pages, and they were conveniently placed in a transparent file bag by the volunteers. Almost everything was handled by the volunteers and the process was actually faster than checking in a regular bag. All my belongings were already checked in, so the only thing I needed to carry was the dog carrier with Luna in it.

Luna wore a diaper the entire ride, and the dog carrier was padded. Volunteers also thoughtfully put a drinking bottle and a little bit of dog food inside just in case. But actually, Luna was trained to not eat, drink, or bark during the flight one week before.

What I did not expect was when I had to take the Luna out of the bag for a security check. I am very afraid of dogs and could not touch the dog. When the security officer noticed this, she helped me out and I was able to go through the security gate smoothly.

The rest went well. Luna was inside the bag under my seat, silent for more than ten hours all the way during the flight. Several times, I could tell that Luna had fallen asleep. What a great job the trainer did!

After arriving in Seattle and going through Customs, Luna must be taken to the CDC office to stamp a seal. It took less than 5 minutes to do it, and it included time to praise Luna for being well-behaved.

After picking up my belongings, the FFR volunteer and the adopting family were already waiting at the gate. As I said goodbye, I realized that I never heard her bark once.

In conclusion, the only task for me was to carry Luna on and off the plane. It was such an easy success!

We hope more people can join us as flight volunteers just like Ying!

Just like Karen Davidson once said, “Saving one dog will not change the world, but surely for that one dog, the world will be changed forever.”
Fur Friend Rescue